Been wanting to try baking eggs in the oven, I finally did!

This is popular right now on Pinterest, baking uncracked eggs in the oven instead of boiling them. I like to try the stuff that looks interesting and we use a lot of hard boiled eggs, my daughter can eat 4 of them at one time and we like egg salad sandwiches so here's my attempt.

I put the eggs in my mini muffin tin, I don't know if it makes a difference I could try the regular muffin tin next time just for the heck of it, I baked them for 25 minutes at 350. The eggs peeled easily, that's something that everyone mentioned in their articles, the yolk came out perfectly cooked, the end that was sitting in the muffin tin did have a little brown on it but it tasted fine (I took pictures but they didn't turn out and I had already eaten them so you'll have to trust me on the yolk).

I'll do it again, it really was much faster than boiling. Read how I Cook Bacon in the Oven, I will never go back to frying it in a pan again! 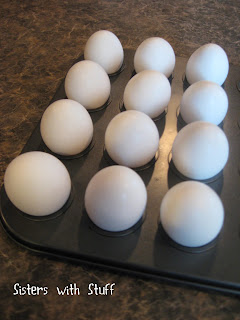