What this is and why you NEED one!

Kind of a gross subject, but you know when the drain in your sinks or bathtub starts slowing down and the water sits for a long time, it's usually because of hair building up, and if you don't get it out it eventually stops draining altogether. You can buy products that you pour down the drain and it unclogs it but have you read the label on that stuff, it is so nasty and poisonous, you aren't suppose to let it touch your skin or breathe it in, some of it causes a chemical reaction that makes the pipe heat up when you pour it in, and it's super expensive! I realize that it's necessary sometimes, the clog may be way down in the pipe or you don't want to spend a fortune having a plumber come to your house, so I'm not saying don't use it, I'm just saying I try to use it as little as possible to keep the chemicals out of my house and out of the environment and water. I have seen homemade remedies using baking soda and vinegar but I have not tried it, anybody know if it works?

I've been using this tool, it's called a Zip It, I found this particular one at Home Depot for about $2.50 but I'm sure you can find something similar anywhere. You just take out the plug for the drain and stick the Zip It down in the drain and fish around for whatever is clogging it or slowing it down. It is really disgusting but it works, I'm actually kind of obsessive about it so I go around the house and clean all the drains quite often (I know weird right?), I figure doing preventative maintenance will reduce the chance of a big clog way down in the pipes where I can't reach. The package says for "one time use" bahhhh....I'll use mine until it stops working, I just clean it after I get done using it. 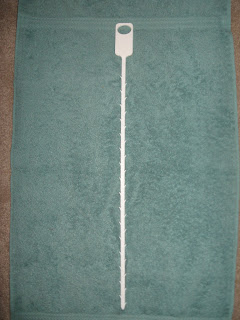 Here's a couple different kinds I found on Amazon, they are all basically the same thing ranging in prices, it's a long plastic stick with a handle and little barbs to hook whatever is clogging the drain, you don't need the most expensive one, mine was super cheap and it still works.