Its no secret that parents have struggled for decades to get kids to eat their veggies. I myself never liked veggies and it was a constant fight with my parents.. no comment mom!
The purpose of this article is to generate ideas to help each other out with this never ending battle. I am not a Dr. or a specialist of any kind. I recognize that what works for me now may not work for me in the future so I'm always trying to stay one step ahead of my little monkey (which is tough to do). I'm aware that what works for me may not work for you but I do love the thought of moms (& dads) teaming up and supporting each other through these challenges.
I was the pickiest eater ever. I still am. I don't like things with different textures or things that look green or slimy. When I had my baby I was determined not to pass my weird food issues onto him. I started him out on homemade baby foods like peas, carrots, cauliflower, squash and sweet potatoes. Later I introduced him to sweets like fruits etc. I hoped that I could train his pallet to enjoy these veggies before becoming obsessed with sweets.

So far he loves broccoli - we call them trees - beans, carrots, lettuce, cucumber and olives. I know it's not exactly a vegetable but the kid would kill for hummus!  I have noticed that for the most part he only refuses the mushy stuff like raw tomatoes or steamed zucchini. My solution to that is to chop them up in tiny pieces and then mix it with the rest of his food. He loves rice so mixing things in rice seems to help. Below is a pic of tonight's dinner. He's said in the past that he doesn't like zucchini so when he asked what it was I told him it was a summer vegetable. He tried it and really enjoyed it. 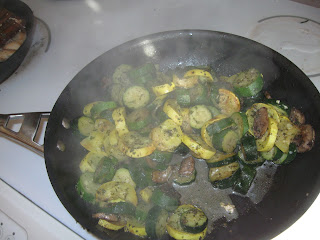 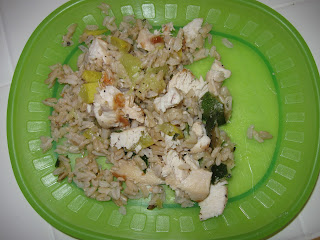 The other thing I've tried to be aware of is my own behavior towards food. Even if I don't plan on eating what I've cooked, I put it on my plate. I try to take a bite in front of him or get my husband to steal it off my plate when he's not paying attention. I do recognize the hypocrisy in that but I'm working on it.
So far these things have worked well for us and my son's diet is very versatile. The challenges I'm running into now that he's a bit older (4 1/2) is hearing his friends say they don't like something and he want's to follow suit. I wish it worked the other way around!
I'd love to hear what has worked for you or what hasn't worked. Also what suggestions do you have as he get's older and realizes that his friends have different tastes or is able to see through my shenanigans?
Check out our other posts on healthy snacks like Yogurt melts and Homemade Smoothies (using more berries will hide the color)!